“I HAVE FOUND BEING AT PART OF [SL&RR] HAS BEEN REALLY REWARDING. WORKING [IN THE PROGRAM] HAS MEANT I CAN KEEP HELPING PEOPLE.” 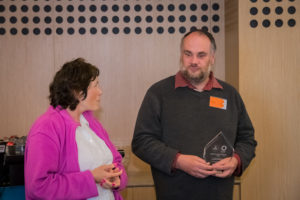 Shane Edwards is a Peer Educator from the Western Metropolitan network. He has made it his mission to help and give to others, and has been a strong leader and contributor within the Sexual Lives & Respectful Relationships community for the past five years.

“[THE PROGRAM] MAKES ME REALLY MOTIVATED, AND REALLY HAPPY THAT I’M HELPING PEOPLE WITH A DISABILITY.”

An admirable advocate for the rights of people with disabilities, Shane has also worked as a Disability Support Worker. He also contributed to cohealth’s ‘Disability Action Plan’; providing input on how the organisation could better welcome and be more accessible to people with a disability. When he reflects on how he became involved in SL&RR, he notes it was actually through a friend, whose supervisor got in contact with him about joining the program. “I have now been a Peer Educator for five years,” he says, “I really enjoy doing it.” Shane notes it makes him “really motivated, and really happy that [he’s] helping people with a disability”.

“WHEN YOU KNOW YOU’VE MADE A DIFFERENCE … IT’S SO WORTHWHILE.”

Shane’s leadership and selflessness does not go unnoticed! In 2018, he was the recipient of the inaugural Janice Slattery Award, which he received at the annual SL&RR Conference in October of last year. Fellow program members have described Shane as someone who “gets along well with everyone in the network and is calm, caring and considerate”. When reflecting on his time with SL&RR, Shane says the most memorable aspect has been assisting with running the program. He notes the reward is in helping people, and that “when you know you’ve made a difference, [it] makes you feel like it’s so worthwhile”.

“I WANT [OTHERS] TO KNOW THAT JUST BECAUSE YOU HAVE A DISABILITY, DOESN’T MEAN YOU HAVE TO RELY ON PEOPLE ALL THE TIME; THAT YOU CAN HAVE SOME INDEPENDENCE.”

When discussing his hopes for the future, Shane lights up. “A goal [for me] would be running my own programs,” he says, inspired by his time with SL&RR. “I would be working with clients with disabilities who are leaving home,” he expands, remembering his own experience, and how it made him want to help others: “When I first [left home], I know I was really nervous, and thinking ‘what’s the first step?’—I want to offer that support to people.” He hopes his own program would help others recognise their own independence; that “just because [someone has] a disability, doesn’t mean [they] have to reply on people all the time” – that they’ve “got this”. On the thread of motivation, Shane notes how important it is to have people around you that inspire you. Shane says a good friend motivates him, because of what knowing him has taught him “about life”, and that he aspires to exude the same “faith and belief he has in life”. He says it’s also important to do things that make us happy. In his spare time, Shane “[loves] catching up with friends at coffee houses, or out for dinner” and “walking [his] dog Oscar”. Filling his life with helping others and making the most of his days, it’s easy to see why Shane has been (and will continue to be) a wonderful contributor to the SL&RR community.